Google Grants: How Google Killed Non-Profits by Giving them Twice as Much Money

On January 28, Google’s new policy went into effect allowing Google Grantees to set a $2 CPC, rather than the $1 CPC maximum that had been in place since the program’s inception in 2003.  The caveat here is that now non-profit ads “will now appear below the ads of traditional AdWords advertisers.”  And it’s quite the caveat.

Look, the whole Google Grants program is a nice idea.  But the $1 CPC limit of the past was a big problem, since it’s so difficult to find keywords that you can bid on for under $1.  Google was generously giving all this money away, but it wasn’t money that non-profit institutions could spend.  So when they announced they were bumping the price up to $2 I got a little excited – this could create a lot more opportunities to get exposure for our non-profit clients.

I always like to ask myself “why?” when a large company makes a move like this.  What’s in it for Google?  Maybe I’m a cynic.  Ok, I am a cynic.  But I think I’ve got good reason on this one.

And here’s the thing.  With the “now appear below traditional Adwords advertisers” clause in the recent policy, it doesn’t matter what the CPC is.  Not one bit.  It could be $2.  It could be $200.

From a competitiveness standpoint at least.  Of course Google still just gives you $10k/month ($329ish/day), so the only thing the CPC affects now is traffic maximization situations… which is actually WORSE for non-profits.  More on this later.

Well, I have a degree in economics.  I might as well use it a little.  So here’s a chart of the previous situation with the $1 CPC max, competitive market for non-profits. 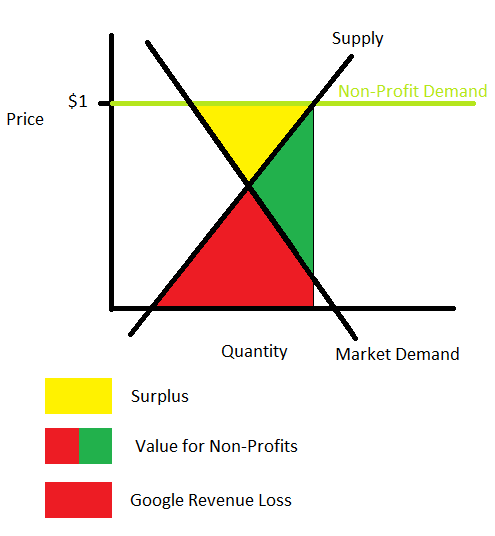 It stands to reason that an economist at Google saw the red area of the chart and identified it as an opportunity to make more money for the company.  And he/she is correct.  Non-profits are stealing away clicks where the equilibrium market price lies below $1.

So they came up with this new policy.  Let’s check out my supply-demand chart on this one: 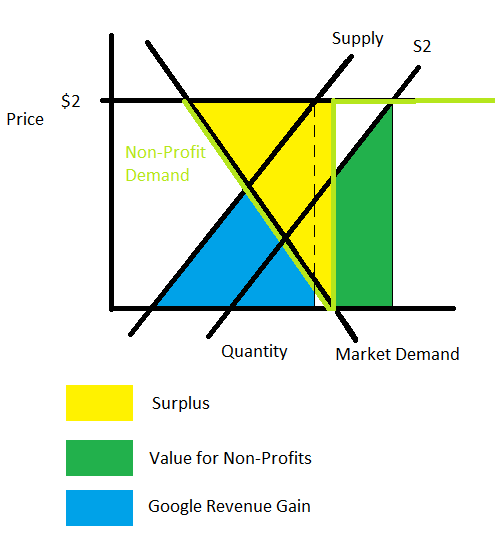 Fancy, right?  Here are the notes:

WINNER: Advertisers with a competitive market price CPC less than $1

Even more interestingly, the move from $1 to $2 is really just a PR move.  Which, by the way, everyone has been eating up.  Most people reacted with excitement, anyways.  In reality, all this really does is cut the number of possible clicks in half.

With this move, non-profits are simply going to be bumping max CPC’s from $1 to $2.  Instead of getting a maximum of 330 people on that monthly budget, you can now only get 165.  After all, we’re working with a fixed-quantity supply situation.  As I’ve shown in the previous discussion, quantity supplied is actually going to DECREASE with this move as well. 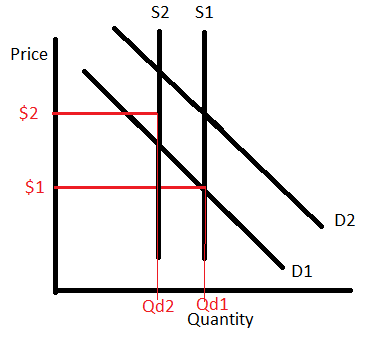 So, I guess you could say I’m not very excited about it.

When has economic analysis ever been right about anything!?  I’d like to maintain my Friedmanian right to change my mind.  Or, in other words, in staying true to economist form I’ve made a number of supportive assumptions.  Enough that, if I were you and you are someone running campaigns for non-profits, I wouldn’t be tying rocks to my feet quite yet.

Those are the important ones that I can think of that can give you some hope.  In other words, those assumptions don’t hold true, but I feel comfortable making them since I think they will have a fairly minor impact on results.  And by fairly minor impact, I mean I’m writing a blog here people, not trying to get my Ph.D.

What Should Non-Profits Do?

You should do what you have been doing, but keep in mind there’s a good chance you’ll be competing more against other non-profits now.  And that’s a level playing field.  Make sure your ads are landing pages are optimized for keywords, as any competitive advantage in that area will help.

Also, keep in mind that you might be looking at more side ad placements on keywords, so adjust your strategy accordingly.

Want to stay on top of digital marketing news and get the occasional tip to improve your performance. Subscribe to our newsletter below!

* Don't worry, we typically only send 1-2 e-mails each month